4 November 2012
by Jurong Church of Christ Leave a comment 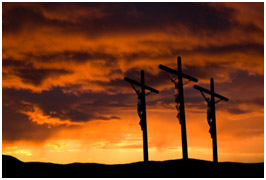 Jesus of Nazareth was crucified outside the city of Jerusalem on Golgotha or the hill of Calvary (Matthew 27:33; Luke 23:33). Two other men were led to that place of execution along with Jesus (Luke 23:32). All three were crucified, one thief on each side of our Lord (Luke 23:33).

One of the thieves and his cross represents rebellion and arrogance, and depicts impenitent, lost humanity. He scoffed at Jesus: “If thou be Christ, save thyself and us.” Remarkably, that thief’s scorn for Christ was greater than his physical pain or the fear of his impending, dreadful death. Jesus, though, had done nothing to arouse this malicious attitude.

This thief crossed the threshold of eternity unprepared and unconcerned about meeting God. Likewise, millions of souls have entered eternity with little or no concern for their souls. Lamentably, they made no preparation to spend eternity in heaven! Many are the souls who even live outside the lowly standards of righteousness established by men; they rebel against civil authority and are often openly without either penitence or remorse when caught and punished. Some sinners claim they have no desire to go to heaven and equally disdain companionship with godly people in this life.

This thief was an unbeliever. If he were to have salvation, he demanded it on his own terms. Further, he wanted to test Jesus; requiring of him miraculous signs. This thief has many cousins possessing a similar inclination living today.

The second thief and his cross represent penitence and depict the only attitude that will lead a soul to be saved. He acknowledged Jesus as the Christ (Luke 23:40-43) and God (Luke 23:40). Even this thief was aware of the public ministry of our Lord. He believed that Jesus was the Messiah or Saviour who was to establish the long prophesied about kingdom. This thief, therefore, attributed innocence to Christ (Luke 23:40). He entrusted his soul and eternity to the man on the middle cross.

The penitent thief also rebuked his sinful cohort and defended Jesus. Followers of the Lord today oppose unrighteousness too (1 Peter 5:8-9; James 4:7). Further, we are to defend the Gospel (Philippians 1:17; Jude 3). His conduct demonstrates that it is imperative for penitent souls to turn from their former sins and evil associations.

That middle cross is immensely important because on it Jesus Christ suffered vicariously (in our place for us). The thieves died for themselves, but Jesus died for the sins of others (2 Corinthians 5:21; 1 Peter 2:21-24: 3:18).

That centre cross was also the cross of fulfilment of Old Testament prophecy (Isaiah 53:4-12). The precious, matchless blood shed thereon saves souls (1 Peter 1:18-20; Ephesians 1:7). (That blood is contacted when one is baptised into the death of Christ, Romans 6:3-5; Colossians 2:12.) The redemption of souls was the mission for which Jesus left heaven and came to earth (Luke 19:10; Matthew 1:21-23).

In summary, impenitent sinners are lost until they repent. Penitent sinners need to obey the Gospel plan of salvation; the redemptive terms under which we now live. The road to salvation begins with the statement “I have sinned” (Nehemiah 1:6). Jesus Christ’s blood is the propitiation for sins by which God saves men by grace (Romans 3:23-25).

“For all have sinned, and come short of the glory of God; Being justified freely by His grace through the redemption that is in Christ Jesus: Whom God hath set forth to be a propitiation through faith in His blood, to declare His righteousness for the remission of sins that are past, through the forbearance of God.”

30 September 2012
by Jurong Church of Christ Leave a comment

Most people believe we should still keep the Ten Commandments. Is this true? What does the Bible say?

The Ten Commandments were given to the nation of Israel at Mt. Sinai after they left Egyptian slavery (Deuteronomy 4:13; 9:9, 10). Moses said: “The Lord our God made a covenant with us in Horeb. The Lord did not make this covenant with our fathers, but with us, those who are here today, all of us who are alive” (Deuteronomy 5:2, 3). This was a new law God had given. It had not been given to their ancestors. It was given only to the children of Israel!

The command to keep the Sabbath (the seventh day of the week, which is Saturday) was not required of man before Mount Sinai (Read Nehemiah 9:13,14). It was not required for any people except Israel for it was not given to anyone else! The Law given at Sinai to Israel, which included the Ten Commandments, was made only with the nation of Israel and no one else! Gentiles (non-Jews) were not required to keep the Law unless they became converts to the Jewish faith. Even if the Old Covenant had not been taken away in Christ, it would not be required of non-Jews. It never was intended for them.

Jeremiah, who lived under the Law given at Sinai, said that this Law was temporary and that God was going to make a New Law with His people: “Behold, the days are coming, says the Lord, when I will make a new covenant with the house of Israel and with the house of Judah; not according to the covenant that I made with their fathers in the day that I took them by the hand to lead them out of the land of Egypt” (Jeremiah 31:31,32). The New Law would be different from the Old. Jeremiah spoke these words 900 years after the Law was given at Mt. Sinai and 600 years before Christ gave the New Law. The writer of Hebrews in the New Testament quotes this passage from Jeremiah and applies it to Jesus Christ who is “also Mediator of a better covenant, which was established on better promises. For if that first covenant had been faultless, then no place would have been sought for a second” (Hebrews 8:6-13).

Jeremiah 31:31-34 also states some other differences between the Old Law and the New. The Old Law was written on tables of stone, but the New would be written on a believer’s heart. The Old Law did not provide for final forgiveness of sins, but the New did. The Ten Commandments were part of that Old Law. They have not been required of people to keep since Jesus died on the cross 2000 years ago (Colossians 2:14). Christ at that time gave a “better covenant, which was established on better promises” (Hebrews 8:6).

What happened to the Old Testament (the Old Law, or Old Covenant)? The New Testament tells us, “In that He says, ‘A new covenant,’ He has made the first obsolete. Now what is becoming obsolete and growing old is ready to vanish away” (Hebrews 8:13). “For on the one hand there is an annulling of the former commandment because of its weakness and unprofitableness, for the law made nothing perfect…” (Hebrews 7:18,19). “Then He said, ‘Behold, I have come to do Your will, 0 God.’ He takes away the first that He may establish the second” (Hebrews 10:9). “For the priesthood being changed, of necessity, there is also a change of the law” (Hebrews 7:12). The apostle Paul wrote: “Having wiped out the handwriting of requirements (the Law of Moses) that was against us, which was contrary to us, And He has taken it out of the way, having nailed it to the cross” (Colossians 2:14). Paul also wrote concerning this Old Law which contained the Ten Commandments: “Therefore the law was our tutor to bring us to Christ, that we might be justified by faith. But after faith has come, we are no longer under a tutor” (Galatians 3:24, 25).

When was the Old Law taken away and the New Law given? It happened when Jesus shed His blood on the cross: “And for this reason He is the Mediator of the new covenant, by means of death, for the redemption of the transgressions under the first covenant, that those who are called may receive the promise of the eternal inheritance. For where there is a testament, there must also of necessity be the death of the testator. For a testament is in force after men are dead, since it has no power at all while the testator lives” (Hebrews 9:15-17).

What was the purpose of the Old Law which was given to Israel at Mount Sinai? Paul answers: “What purpose then does the law serve? It was added because of transgressions, till the Seed should come to whom the promise was made; and it was appointed through angels by the hands of a mediator” (Galatians 3:19). The Seed is Christ (Galatians 3:16). The Old Law, which contained the Ten Commandments, was given to keep Israel under control until Christ came. Since Christ has come and has fulfilled this Law, He has taken it out of the way. He has given us a New Law (covenant or testament). We must go to this New Law to learn how God wants us to serve Him today!